VITAS Healthcare Vice President of Operations Terry Holecek was elected vice chairman of the Ohio Board of Executives of Long-Term Services and Supports (BELTSS) at the June 2017, board meeting. 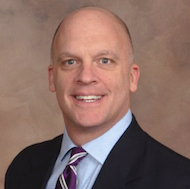 Appointed to the board by Governor John Kasich in November 2015, Terry represents home- and community-based services on BELTSS, the licensing board in Ohio for nursing home administrators.

Terry received his bachelor’s and master’s degrees in gerontology with a concentration in long term care administration from Kent State University, Kent, Ohio.