“Hospice takes medicine back to the future. It’s cutting edge because it’s about people, not about physicians or healthcare systems. Hospice is patient-centered, palliative, supportive. That’s radical. We treat the people; they are in charge. And the doctors who will succeed? In an interview, they’re not the ones who tell me, ‘This is who I am.’ They’re the ones who say, ‘I want to be a part of this.’” 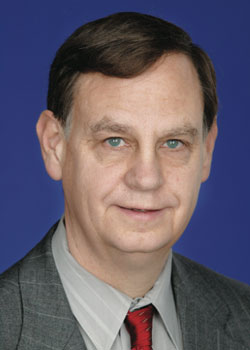 Dr. James Wright began his medical career as a nurse’s aide. Then he joined the army and earned his nursing degree, then his DO; he completed his internship and residency at Dwight David Eisenhower Army Medical Center in Ft. Gordon, Georgia.

It was as a resident that he had his first brush with end-of-life care. He went into a hospital room and the patient told him she was dying and wanted to talk about it. So he sat with her for an hour, mostly listening. The next morning, her bed was empty; she had died in the night.

A Career to Launch

The experience stayed with him, but he had a career to launch. He left the army after 14 years of service and set up a family practice back home in Ft. Worth, Texas. In 1991 a local physician, who was leaving a hospice called VITAS to be a full-time oncologist, mentioned to Jim that there was an opening for a part-time team physician.

“End-of-life care was new and evolving,” Jim remembers. “It was more interesting than primary care. It was a whole new avenue. The patient had been through a serious illness and was at home. I was in their environment, and working closely with a nurse—I had been a nurse; I enjoyed that. I had been by myself in my practice; now I was part of a team. I interacted with the RN, the aide, the office. I helped them do their jobs. Hospice was a bit like finding myself.

“I never forgot where I’d come from, and that made me a better person and a better physician,” Jim believes. “As a nurse, I saw that patients talked to me and clammed up with the doctor. The aide saw the functional decline, because they were the only one giving baths. So as a doctor, I liked the team aspect; I was always aware that there was more for me to know.”

There was more to know about hospice, too. When he started, hospice physicians didn’t manage patients, they advised the nurses. That changed over the next ten years. Jim became an expert in opioids and other meds most physicians steered clear of. In 1996 he became board certified in hospice by the Academy of Hospice & Palliative Medicine—not official sanction, but the first step.

“We had corporate support, and I grew as a VITAS physician from an egg to a chicken, incrementally learning, and I would come back to the office and train the other physicians,” he recalls.

Hospice physicians were changing too, from mostly retired to part-time hospice doctors to full-time hospice doctors. They got younger, more cutting edge, interested in disease progression and symptom management. Palliative care became a distinct kind of comfort care, more academic than hospice care and centered in hospitals. Hospice, 85 percent of which is funded by Medicare, was generally an outpatient service. By 2007 the combination of hospice and palliative medicine had obtained status as a sub-specialty.

“I didn’t set out to achieve career goals, but I’ve experienced an enormous amount,” says Jim, reviewing a 20-plus-year career. “And now palliative medicine is its own field of study. It’s about saving money and addressing rehospitalization concerns, but mainly it’s about people with significant illnesses. There’s a huge need. And there aren’t enough doctors being created.”

If hospice sounds too good to be true, Jim will tell you that its downside is burnout. “Good palliative medicine is long hours, and sometimes it hurts too much,” he says. “But medicine is changing, and hospice and palliative care are right up there: an interdisciplinary team that focuses on patient goals and plans of care.”

According to Jim, it’s no place for a God complex. It’s better. “Hospice is a pipeline for being part of humanity, instead of being God,” he says.