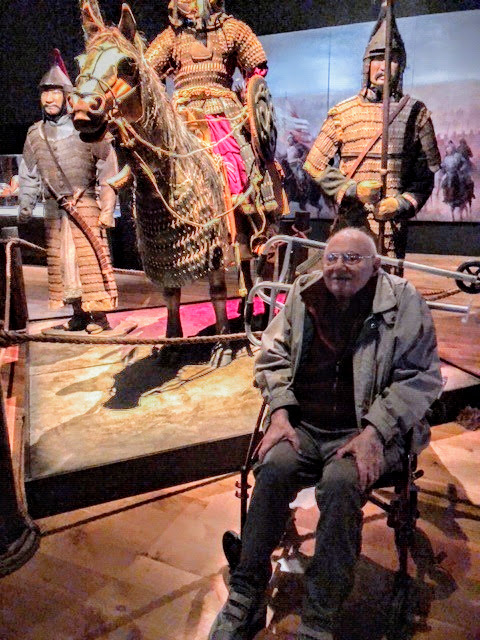 Kansas City VITAS patient Warner Bergh spent part of his childhood in China — and he loves history. His hospice team recently helped link those topics together through a personal tour of a Genghis Khan museum exhibit.

An Early Interest in History

Before immigrating to China, Warner lived in Germany. As an eight-year-old boy there in the 1930s, he was oblivious to the rapidly changing political and cultural landscape of his country. Instead, history lessons of Genghis Khan’s conquest through Asia and Europe captured his attention.

“In public school in Germany, I learned about the Mongol tribe from East Asia who conquered on horseback,” Warner says. “Being a history fan, this story never left my mind–especially in 1938, when my parents and I left Germany and immigrated to China. I was reminded of the history of the country that would be my home.”

More than 80 years later and now a VITAS patient in Kansas City, Warner found a chance to reconnect with the astounding stories of his childhood when Volunteer Services Manager Diana Owen arranged a personal tour of the Genghis Khan exhibit at Union Station.

The outing initially centered on a train exhibit at the historic station. “Warner’s social worker told me that he loves trains, and I knew Union Station had a very large model train exhibit,” Diana says.

She contacted the station to arrange a private tour and learned about a concurrent Genghis Khan exhibit. As it turned out, Warner had a deep-seated interest in both topics.

On February 1, a Union Station volunteer showed Warner, his daughter Evie and Evie’s husband through the Genghis Khan exhibit.

Warner soaked in the sights from his wheelchair: towering murals, detailed dioramas, and lifelike semblances of warriors and their mounts, armed and armored in steel and leather.

Afterward, he offered a succinct but positive review:

“The exhibit was very well done, and I definitely learned new information about Genghis Khan.”

In the coming weeks, Warner will have an opportunity to see some exceptional model trains, too, thanks to Diana and the VITAS team, who are planning a return trip to Union Station for Warner.

‘It Gives me Chills’ to Make a Difference

For Diana, fulfilling patients’ wishes by connecting them with community resources is one of the best parts of her job. She loves “the hunt”–the process of researching patients’ interests and mobilizing personnel to make their dreams come true–as well as the feeling of accomplishment that follows.

“Making a difference in people’s lives, that’s what we’re here for. Anything that I can do to make their days better is worth any time or effort I put into it,” Diana says. “I just have to know that the patient and family enjoyed it–it gives me chills every time I’m able to do that.”