VITAS patient Russell Moen smiled wide as Milwaukee Brewers left fielder Ryan Braun swung at the pitch and connected. A sharp thwack reverberated through the stadium, and Braun was halfway to first base before Russ caught his breath enough to join the cheering crowd.

At that moment, Russ wasn’t a hospice patient accompanied by his nurse–he was somehow a younger man, jocular and full of vigor, enjoying a beautiful day at the ballpark with a good friend.

In reality, Russ was both, just as Jeremy Gwilliam, VITAS LPN, was both caregiver and friend to the older man.

After more than a year of twice-weekly care visits, Jeremy had grown used to his patient’s youthfully irreverent attitude: Russ has end-stage lung cancer and is dependent on oxygen, and often forgot–perhaps intentionally–to wear his mask. He’s wheelchair-bound but refused to receive care in a facility. His hospice team helped care for him at home.

“He’s the coolest 81-year-old you’ll ever meet–he even listens to hip hop,” Jeremy said of Russ. “But he wouldn’t last a minute in a facility. He insists on living independently.”

The Baseball Game of a Lifetime

During a routine visit, Russ told Jeremy that he’d like to see a Milwaukee Brewers game one last time. Jeremy began to make arrangements, planning to pay the bill on his own. Then he remembered VITAS Community Connection (VCC), which provides financial assistance to hospice patients, their families, and community partners through donations.

“I feel very proud to work for an organization that can do this for people.”Jeremy Gwilliam, VITAS LPN

Christine Nelson, volunteer manager for VITAS in Milwaukee, helped Jeremy apply for and receive funding. With VCC’s help and a donation of two tickets from the Milwaukee Brewers organization, Jeremy and Russ were set for the baseball game of a lifetime.

In the several weeks beforehand, Russ was ecstatic. Although his condition continued to slowly decline, Russ was focused squarely on game day. He couldn’t stop thanking Jeremy for putting the trip together, and his elation about a sudden upswing in the Brewers’ performance seemed to help dull the pain that his illness brought.

On game day, however, Russ took a turn for the worse. When Jeremy arrived at Russ’ house, he found the elderly patient in alarming disarray. Russ had seemed fine during a nursing visit on the previous evening, but that morning he was slumped over, confused and short of breath.

“My first instinct was to call and say Russ can’t make it, but I knew that would crush him,” Jeremy said. So, he got to work.

“I got him cleaned up, dressed him, trimmed his mustache, beard and eyebrows and–just in the nick of time–made it to the van.”

At the game, the duo had a blast. Russ was thrilled to be there, telling Jeremy again and again, “This is great, this is unreal. I can’t believe this is happening!”

Russ started “the wave” in his section, cheered with each hit and groaned when his team struck out. He took full advantage of the ballpark atmosphere and bought himself a Bob Uecker T-shirt, a bratwurst and a drink.

Jeremy administered pain medication and saw to Russ’ other needs between plays. A group of Brewers fans sitting behind him and Russ gave his nursing efforts a cheer worthy of a stolen base.

Midway through the game, the Brewers staff presented Russ with the ball that Ryan Braun hit for his decisive double. Jeremy spotted a tear in Russ’ eye as he graciously received the gift and managed to snap a few photos of the emotional moment.

Two of those photos now hang framed in both Russ’ and Jeremy’s houses, memorializing their friendship and the joy that VITAS and VCC were able to bring to Russ despite his illness.

The Brewers won the game 5–1, as fine an outcome as any for a fan’s final game. But for Jeremy, the real winner was Russell, who managed to overcome his mounting health issues long enough to make a dream come true.

“The best part of the experience was seeing the twinkle in Russell’s eye,” Jeremy said. “I was glad to be there and, obviously, so was he. I feel very proud to work for an organization that can do this for people.” 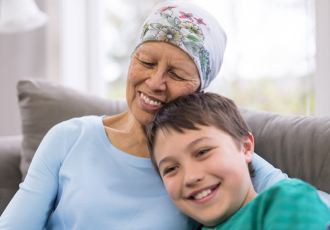