Team Manager Andrea Canon, RN, didn’t become a nurse to witness young patients face their mortality. End-of-life care had not been part of her career plan.

“Never in a million years did I think I’d be involved in pediatric hospice,” she says.

But there was Andrea, sitting beside her colleague Erick Guadamuz, LPN, both listening carefully as a young woman poured out her thoughts and fears about dying. Whoever Andrea had been at the start of her nursing career, this was exactly where she needed to be: caring for 18-year-old Genesis Ortega and other young people with advanced illness.

Genesis had osteosarcoma, a tumor-producing bone cancer that had engulfed her left knee and resulted in an implanted prosthesis. Her fear of death came from personal experience: She watched her mother die of the same disease. When isolated, osteosarcoma has a survival rate of 70-75%, but Genesis’ cancer had spread to her lungs.

Her palliative care doctor, Patricia Deforest, DO, of VITAS Healthcare, had recognized the toll inflicted by third-line cancer treatment and an array of trial drugs. Although one trial remained, it wasn’t clear whether Genesis would qualify. Dr. Deforest offered an alternative.

“Genesis was tired and had pushed herself further than she could have imagined through this disease,” says Dr. Deforest. “I seized the moment to discuss the option of focusing on comfort and experiences, filling her days with whatever pleased her. I introduced her to the concept of hospice.”

The VITAS Home Medical Equipment team delivered a medical bed, oxygen supply, and pain medications to the home where Genesis lived with her guardian aunt and uncle. There, Andrea and Erick helped Genesis’ family administer treatments and empty the PleurX system that drained fluid from the young woman’s chest. Even as her health declined, Genesis kept her spirits high—along with her sense of mischief.

One day, as Andrea was draining Genesis’ PleurX system, it seemed that an unusual amount of fluid had collected. Genesis noticed Andrea’s concern and decided to have a little fun at her expense.

“As soon as I turned the system on, Genesis let out a scream and scared the living daylights out of me,” Andrea recalls. “I turned it off and asked what was wrong. She said, ‘I’m okay, I just wanted to see your reaction.’ All she could do was laugh and laugh.”

Genesis “was very verbal about not wanting to die,” Andrea recalls. But if death was to come sooner rather than later, Genesis wanted her exit to have an impact. During a home visit with Andrea and Dr. Deforest, the teen made her last wish known.

“In a quiet moment visiting with [Genesis and her aunt] in their home, I asked if there was anything else that she wished she could accomplish,” Dr. Deforest says.

“She wanted more than anything to give her tumor to research after she died, with the hope of benefitting another child with her same cancer,” Dr. Deforest explains.

Andrea and Dr. Deforest explained what the request would entail, and Genesis’ aunt and uncle gave their full support. Once the family had chosen a funeral home, April coordinated care.

Providing Their Patient with Memorable Moments

The next few weeks, Andrea says, were “a waiting game.” Genesis’ symptoms advanced, slowly at first, then seemingly all at once.

In pediatric hospice, Andrea explains, memory-making is a key focus of care, and relatively minor events can take on oversized significance in the face of an early death. From surprise visits from the care team in T-rex costumes to crafting parties with Genesis’ friends, Andrea, April, and the team tried to provide their patient with many memorable moments.

For instance, when the team learned Genesis was a basketball enthusiast and San Antonio Spurs mega-fan, they arranged for a home visit by the team’s mascot, Coyote, and gathered personal video messages of support from several players. The gestures brought much-needed moments of joy to Genesis and her family.

Eventually, Genesis’ symptoms progressed to the point where she required continuous home care, known at VITAS as Intensive Comfort Care®. Continuous care nurse Elmetta Sutherland, LPN, stayed with her patient and did what she could to mitigate any discomfort.

The afternoon that Genesis died, her aunt and uncle were by her side. As they grieved, Elmetta pronounced the death and contacted the funeral home. Dr. Deforest, Andrea, Bradley, and April arrived shortly after to help the family through their immediate loss and bid farewell.

‘No Single Person Would Be Able to Do This’

In August, medical researchers began using data from Genesis’ tumor to study how osteosarcoma functions. With help from the VITAS team, an extraordinary young woman’s extraordinary wish is fulfilled, and Genesis leaves behind a legacy of hope and potential.

For Andrea, that’s the beauty of pediatric hospice care.

“The most rewarding part is to see Genesis’ dream come true and know that my team helped to orchestrate it,” she says. “No single person would be able to do this. It took a chaplain to give prayers, a social worker helping with final arrangements, and crisis care staff providing support throughout.”

“My team goes all-in with every patient. They’re my rock, they’re the reason we can do what we do,” Andrea continues. “The impact that we were able to have on Genesis’ life was worth all the sweat and tears that came with it.” 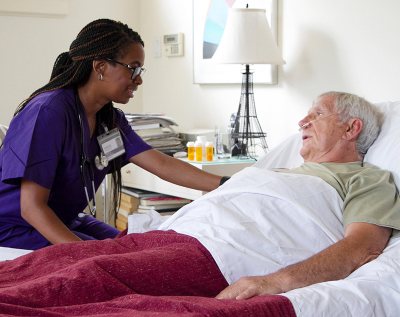 How Employees Have Been Changed by Their Experiences