A female veteran and VITAS patient shares her story

Like many World War II veterans, Helen Bachman is humble about her contributions to the war effort in the 1940s.

She was only 20, helping her mother at home, when she watched a recruiting film one evening at a movie theater, followed up with a visit to a recruiting office and signed up.

She’s not likely to brag about her work as a Navy airplane mechanic. The boot camp that she and other women endured as part of their training? “It wasn’t too bad for us,” remembers Bachman, now 97. “We only had a week of it.”

But Carole Quackenbush knows differently. A VITAS veterans liaison in Cincinnati, Carole gets to know each veteran patient personally as they’re admitted into hospice care. Like all veteran liaisons, she listens to their stories. She presents them with certificates thanking them for their service, along with patriotic red, white and blue afghans. She acknowledges that most hospice veterans are men; during WWII, 16 million U.S. men were joined by 350,000 women who volunteered.

“An incredible lady,” a trailblazer

“But as soon as I walked into (Helen’s) home, I realized what an incredible lady she is,” Carol says. “For a woman to join the military was not a common thing. She was a pioneer or trailblazer for women. It certainly took a lot of courage and drive for someone to do that. She’s just a kind, gracious and engaging person, as well as modest, like most people of that generation. She keeps saying, `I didn’t do much!’” 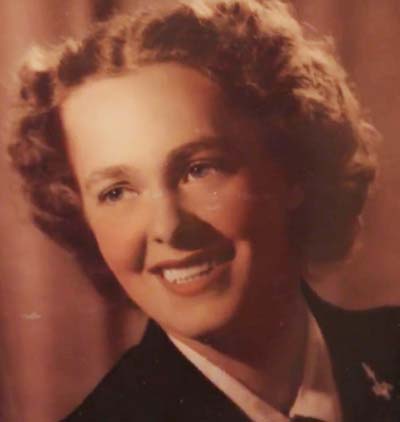 Helen, a Cincinnati native who receives hospice care from VITAS in a local retirement community, says she didn’t understand the full value of her service until she started discussing her wartime experiences with others.

“I felt that what I did was minor,” she says. “It wasn’t like the guys serving, and all the work…and all that they went through.” But she soon realized from others that without the work performed by her fellow female soldiers, “the guys couldn’t have learned to fly.”

Helen served as an airplane mechanic, stopping Navy pilots as they landed and directing them to various hangars for repairs and maintenance.

“I had the envy of every girl on that base,” she says with a smile, “because they all wanted that job.”

Brimming with ingenuity, deserving of honor

Women also brought their unique brand of female ingenuity to common military problems, she says. One was the painful aftermath of shooting-range training on women’s shoulders.

“Put that gun right there,” she recalls, pointing to her shoulder and making an exploding recoil sound. “You know you’ve got a gun. It wasn’t pleasant.” But a fellow female soldier discovered that a sanitary napkin served as an ideal shoulder pad on the shooting range. “You couldn’t hardly feel it after that,” Helen says with a smile. “It worked out just great.”

It’s hardly surprising that Carole, who’s been with VITAS since 2006, understands the importance of caring for veterans. Her father’s career in the Army was 30 years long.

“It is such a gift and honor. Every veteran I’ve met has had an impact on my life and on my care of veterans,” she says. “The fact that they signed up to save and support and risk everything for people they don’t know is the reason why we need to make sure we honor these people.”

VITAS honors veterans by serving them with expert care customized to their unique needs.