Pensacola, FL – Ask him what he did during his years as a US Army cook, and Herbert Clippinger will tell you without hesitation, “I filled a lot of bellies.”

Herbert, a VITAS patient who turned 100 in April of this year, fed US soldiers through some of America’s most difficult, drawn-out wars: WWII, the Korean War and the Vietnam War. One of his fondest memories was serving as a driver for comedian Bob Hope as he entertained troops in Korea.

But when Herbert retired from military service after 29 years, he did not receive an honorary American flag. When long-time friends Crista and Jim Cashdollar of Fort Walton Beach discovered that oversight, they contacted Tabitha Ingermann of VITAS.

The Cashdollars are Clippinger’s primary caregivers; Tabitha is an admission liaison for VITAS® Healthcare in Pensacola, the hospice company that has been caring for Herbert in the Cashdollars’ home since February, when his health began to deteriorate.

“When we first met Mr. Clippinger, he told our admissions team that he had one goal: to live to see his 100th birthday,” says Tabitha. “And we made that happen.” 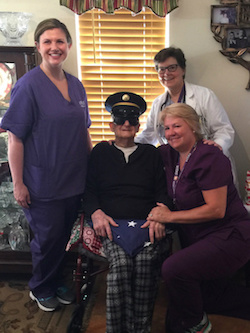 And then she focused her efforts on the long-overdue flag. Tabitha contacted an Air Force sergeant at Eglin Air Force Base in Valparaiso, told him Clippinger’s story and asked about a flag for her deserving centenarian patient (even though he’d served in another branch of the military).

On July 25, Herbert received his flag from four members of the Eglin Air Force Base Honor Guard in a touching, emotional ceremony in the Cashdollars’ back yard.

“They did a full honor guard presentation, and it was probably one of the most gratifying things I’ve ever been involved with,” says Tabitha, who is also a veteran. “I’ve been to military funerals, where I’ve seen the flag presented to surviving spouses and children. But it’s extremely impactful for a 100-year-old World War II veteran to see a young airman get down on one knee and say, as he presents the flag, ‘Sir, on behalf of a grateful nation…’ ”

Members of the Cashdollar family were there, as was Herbert’s VITAS care team, including nurses, aides, Chaplain Thomas Baez and Home Care Physician Jacquelyn Puglia, MD. So was Klinger, Herbert’s 20-year-old cat.

There wasn’t a dry eye in the house. “None of us had any Kleenex, and all you could hear was sniffling,” Tabitha recalls. “Mr. Clippinger just kept thanking us and the honor guard airmen over and over again.”

She was equally touched by the airmen’s responses: “They kept saying, ‘Ma’am, this was an honor for us. We rarely get to do this, visit with living veterans. The honor is ours.”