Volunteering: It Is Better to Give Than to Receive 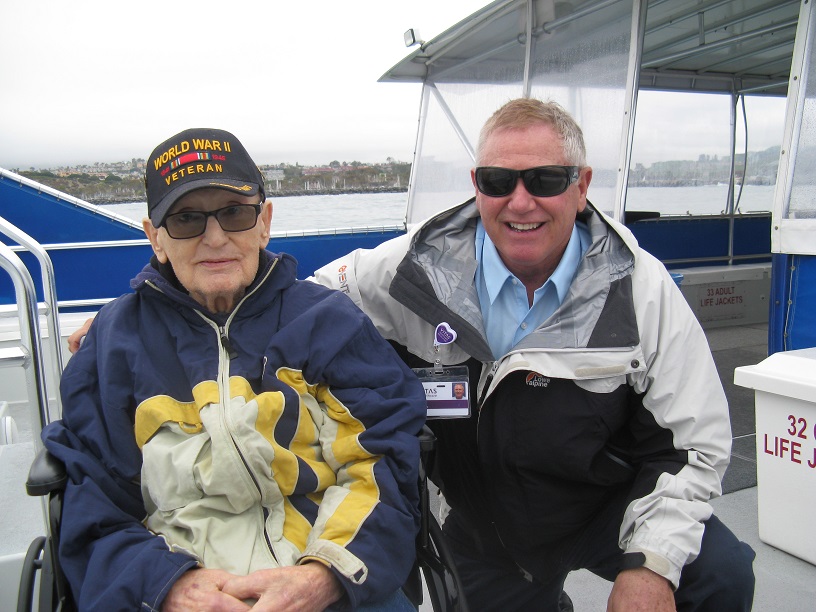 Vincent and David aboard the Dana Pride whale-watching boat

The old saying didn’t make sense to me when I was 6 and the pleasures of receiving Halloween candy far exceeded any pleasure in giving it away. I thought perhaps this adage was my mother’s 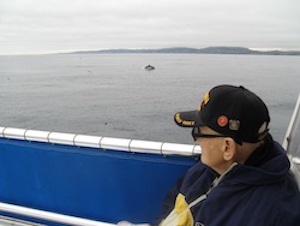 clever way to prevent a mouth full of cavities. She was a dental assistant, after all. But the wise old words stayed with me.

I started volunteering with VITAS the summer of 2016 after a 40-year career as a lifeguard. I was hoping to make my retirement more rewarding, and I wanted to get back to being of service.

One of my first patients was a WWII Navy veteran named Vincent. I was a bit nervous, not knowing for sure what to do, how we’d get along or if Vincent would even like me. None of my fears were justified. Vincent expected nothing and appreciated everything.

Here was a man, in his 90s and having outlived all his friends, who just needed companionship. He needed to get outside and breathe some fresh air. So I rolled him in his wheelchair around the neighborhood until we both knew every crack in the cement and where every low-hanging branch was.

After a couple of weeks, Vincent suggested going to other places. So I talked to the other members of the team about getting Vincent out more, and soon we were visiting parks, beaches, piers, the zoo, etc. Everywhere we went, I felt that by sharing it with Vincent I was experiencing it for the first time. One day we were at a zoo, and I remember thinking, “I’m so glad I can share this with Vincent.” Then he said to me, “I used to bring my children here a long time ago.” That’s when I realized that he, too, was sharing a memory as well as an experience.

Vincent’s board and care home was just a couple of miles from where he had lived and raised a family. So, where we might stop for coffee, I discovered, was the same place he might have brought his kids for a jelly doughnut on a long-ago Saturday morning. That mutual giving and receiving is how our relationship grew.

One day Vincent said he would like to go out on a boat. I wanted to make his request a reality, because I knew he wanted to be closer to his memories of the war. Vincent had spent quite a bit of time on the sea during WWII; whenever we were at the beach, Vincent would share vivid memories of his experience in the South Pacific.

One October day while visiting Laguna Beach together, Vincent shared an amazing story: In 1942, while overseas during the Guadalcanal Campaign, his platoon came to shore by boat, then dug foxholes in the nearby countryside to hide from incoming enemy fire. Vincent was in a foxhole with two other Marines when a mortar exploded. The other two soldiers, closer to the point of impact, were killed. The doctors told Vincent later that if he had been 10 feet closer to the explosion, he would have died, too.

Instead, Vincent told me, the explosion sent him flying out of the foxhole. While he lay unconscious on the battlefield, he felt himself rise up out of his body and into a brilliant light, where he saw Jesus and felt an amazing sense of peace. He said he knew then that Jesus was watching over him. When he woke up, he was in a hospital bed.

Here in Orange County, CA, whale-watching boats go out from Dana Point Harbor every day. With the help of his hospice team, I planned a whale-watching trip for Vincent. The day we went out was cloudy, calm and quiet—almost surreal. Vincent was smiling and excited for the first hour or so, but by the time we were several miles out, he was reflective; I could tell that Vincent’s thoughts had turned to a distant time and place.

My thoughts, too, were of a time long ago—when my mother would tell me about giving. And I realized that I’ve known for many years that she was right: It is truly more rewarding to give than to receive.

Author David Peden now works as a hospice aide on a VITAS Continuous Care Team in Orange County. He was already certified as an EMT, he explains, so he earned his HHA and works for VITAS five days a week. He also continues to volunteer every Wednesday. Vincent apparently took to his new mobility: He moved to Oregon to live with his daughter shortly after his trip to sea.