For professional filmmaker David Tinsley, music is a family connection, the language of emotions. He remembers being little and singing while his mother, Terry, played the piano. It was Terry’s mother, Edris Cassida, who insisted her daughters study music, even though—or perhaps because—she had no training herself. 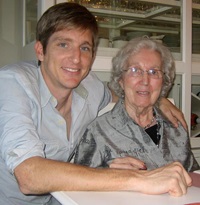 David remembers accompanying his mother and her sisters visiting his grandmother in a house “filled with music.” After lunch, the sisters sang and played the piano, while Edris would recite poetry. She bought David his first guitar and music lessons. Edris instilled a love of music in her family. “My mom and I bond over music,” David says today.

In 2009, Edris, a widow who had become increasingly frail and disoriented due to Parkinson’s disease, went to live with Terry in Central Florida. She was still walking and talking a bit, still coming to the table for Sunday lunch with the family, which was still followed by music and singing.

As Edris declined, she began receiving VITAS hospice services at home. David and his sister were both starting families and Sundays were livelier and noisier than ever, but Edris was becoming more frail and silent.

“My grandmother became more and more unresponsive,” David says. “She was on hospice for two years; it became normal for us to forget there was someone dying in the house. It’s hard to pinpoint the moment we lost her, but we lost her before she died. Day by day, we had our families’ immediate needs to focus on. Life was happening in other places.”

In the fall of 2015 David received a short video on his iPhone from his dad. He watched as the music therapist on Edris’ hospice team played the guitar for his grandmother. Although Edris could neither communicate nor seem to understand, David saw an unmistakable light of recognition in her eyes.

His father’s bit of video stopped David in his tracks. “It was a build-up of the years of us not dealing with what was going on in that room,” David says now. “It reminded us that she was still alive. It was this instant connection with the emotional loss we had been feeling over those years.”

David is a professional videographer and owner of Tinmen, a boutique production company in Orlando that creates promotional videos. “I immediately started thinking I wanted more of that,” he says of his father’s clip. “Could we talk to the music therapist? Could we follow her? Could we capture moments like that on film?”

David says his strength is “finding topics I’m passionate about.” He realized that shooting footage of the music therapist would help him and would have an impact on others. “I knew the video would help someone transition into or cope with hospice,” he says. “The music made hospice not about thoughts of imminent death, but about hope. Music transcends understanding.”

He spoke to Edris’ hospice team and to Mark Sickmiller, VITAS’ digital marketing manager. They arranged for David to join the music therapist, Erica, on her rounds and got approval from her patients and their families. David and Tinmen self-funded the video and gave it to VITAS, knowing that we would be able to use the video to reach other families who could benefit from music therapy.

Capturing the Music, the Moments

And so as a tribute to his grandmother, to his own family traditions, to a talented music therapist and to hospice, David followed Erica Santiago, the VITAS music therapist who had touched Edris when nothing else could. They filmed his mother and Erica singing “Amazing Grace” to Edris, just three months before her death.

“By then there was no response from my grandmother,” he remembers, “but by then it was like we were all getting music therapy—my mom, my dad and me.” He followed Erica to other patients as well. And he got just what his father’s phone video had inspired in him.

“Music changes the focus of hospice,” David has learned. “The music is a gift. I was just getting those expressions on film.”