A Writer Exercises Her Volunteer Skills

An Award-Winning Writer Volunteers at VITAS

Diana Gould has been a VITAS patient care volunteer since 2010. She is also an award-winning writer and television producer whose work has captivated millions of people worldwide. In January of 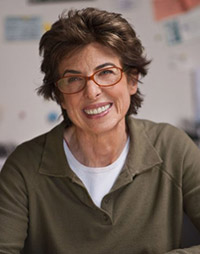 A prolific writer/producer, Diana has written for some of the most successful shows on television, including episodes of Knott’s Landing and Dynasty, as well as movies and several mini-series for network and cable. Her TV movie, I Love You—Good-bye won the Population Institute Award, and her short story, “The Monkey’s Daughter,” was nominated for the University of California–Los Angeles Writing Program’s James Kirkwood Award.


Diana's Essay on Volunteering at VITAS

Following is an essay that Diana wrote, reflecting upon her experiences as a VITAS volunteer. Her essay was shared at a volunteer appreciation luncheon in 2014 for VITAS Healthcare volunteers in Southern California.

"You’re given hours of training and guidance (crucial and helpful) and then you’re thrown on your own into situations which nothing can prepare you for—except everything you’ve learned and done as a human being up until then.

You enter into people’s lives at the most critical juncture, and somehow, though you’ve never met before, you are allowed in.

You have conversations more intimate than those you have with your own loved ones. You hear things that people would not say to their families.

You are the receiver of confidences, observer of indignities, witness to vulnerability—and form connections that surprise you with their depth.

You learn that, no matter who you are, you have something very precious to give: attention.

I think it’s no accident that our language talks about “paying” attention, because attention is very valuable.

We sit in rooms that most people are eager to leave; and we stay. We bring our presence and our shared humanity.

Sometimes we have meaningful exchanges, sometimes we simply sit and watch TV. We are there for the patients and the families, and we take our cue from what they need in that moment.

For the rest of our day, we are not concerned with what we need. For this brief time, we are there to serve someone else’s (need).

We bring the gift of our attention, and we leave with the gift of knowing that have a much larger capacity for love than we ever dreamed possible.”

If Diana’s story has inspired you, learn more about becoming a hospice volunteer today!