A Day in the Life of Hospice Medical Director Paul Pugliese, MD 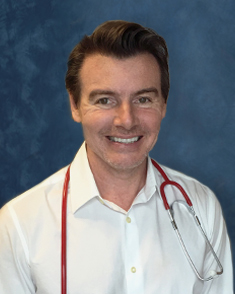 “Most of you don’t know Dr. Pugliese, but he’s a legend. There were only a handful of hospitalists in this city when we started together. He became a full-time medical director for VITAS eight years ago. Now he teaches at the university; rounds on patients; works with medical students, residents and fellows.”

And that’s the way a group of young hospitalists, all from one hospital, are introduced to Paul Pugliese (pool-YAY-zee), MD, VITAS medical director, by one of their more senior peers. All are guests at a dinner hosted by VITAS to give Dr. Pugliese some face time to talk to other physicians about hospice.

What do VITAS medical directors do?

The job is defined by each team, by the community they serve and by the person doing the job. Dr. Pugliese is charming and down to earth; he is also an astute hospice physician.

“How can we help you with your hospice-appropriate patients?” he asks the hospitalists sitting with him at a long dining table that Monday night. “What do we do right? What can we do better? There are a lot of obstacles at your hospital,” he acknowledges, “but hospice can be a hospitalist’s best friend.”

Slowly, they warm to the topic and the presenter. They speak up, air their concerns, ask questions. The medical director listens, nods, makes suggestions. Think of it this way, he suggests at one point: if the patient is appropriate, “Hospice is guaranteed home health care for the rest of the patient’s life.”

It’s an informal session, because that’s representative of the kind of medical director Dr. Pugliese is. He’s shoulder-to-shoulder with a dozen young doctors, leaning across the table. He has their attention; they have his. The first course arrives; Dr. Pugliese ignores it.

He tells them how to have the end-of-life conversation. They tell him about their hospital’s requirement to use only in-house palliative care services. They ask about making a six-month prognosis—how can they know? What if they’re wrong?

It’s an intense conversation, and it’s brief. Soon they’re digging into entrees and talking over one another. But the teaching moment worked. These new doctors are now aware of their role in initiating end-of-life conversations. There is talk of next steps. One hospitalist and the VITAS sales representative will meet with hospital decision-makers as a result of this meeting.

When home care is not enough

Twelve hours later, Dr. Pugliese is striding through the corridor of the VITAS inpatient hospice unit at another area hospital. Inpatient care is a level of hospice care that is available when home care cannot control symptoms. Patients are brought to this inpatient unit with the goal of getting symptoms under control so they can return to home care.

Dr. Pugliese has a hug for every staff member on the floor. “Who’s on today?” he asks the group in general. “Are you new?” he asks, spying an unfamiliar face. As they fill him in on the patient census, he makes verbal notes. “Oh, and we had a nice big talk with her family. She’s one of nine—we talked to their mother,” he nods. And, “Yes, we had a veteran’s ceremony for him.”

Rounding on patients—and their families

Beginning rounds, he and a nurse enter a room that is dark, the air conditioner on full blast, the 42-year-old patient snoring. Yesterday he was brought from home in excruciating pain. “He’s in a good place right now,” the medical director says, not waking the patient. “But it will take a few more days before he’s ready to go home.”

Another patient looks unconscious. She’s in her 90s, eyes closed, dentures removed, head thrown back, fragile skin taut over the bones of her face. Dr. Pugliese speaks to her in Spanish, his tone warm and confident. Her eyes pop open. She smiles and greets him in Spanish. Alert and very much alive, she answers his questions. She is ready to return to her nursing home, both agree.

Across the hall, a woman is sitting with her husband’s body. He died quietly in his bed, minutes ago. She is alone for the moment, and bereft. The doctor consoles her in English and Spanish. They hug for a long moment.

“You were here,” he soothes her. “We got him comfortable. He knew how much you loved him.” She weeps and holds him tight. “And we’re here for you,” he tells her. “You don’t just walk out that door and that’s it. No! We’re here.” Slowly, gently, he disengages and moves on.

Status reports and following up

“Team meeting,” he announces to the staff. “Five minutes,” he promises. For larger VITAS staffs, weekly team meetings take a half day, but Dr. Pugliese does it his way. Each nurse, the social worker, the chaplain and the nurse manager gather in the staff room. One by one they review their patients, from vital signs to visitors and appetites.

“She’s feeling alone,” Dr. Pugliese comments after one report. “Her family is in San Juan and Tallahassee. Rosemary, maybe you should follow up.” And the chaplain, Rosemary, nods and makes a note in her book.

Rosemary ends the meeting by reading the names of patients they cared for who have died at home in the last week. “I think it’s good that we remember them, that’s all,” she says. The team is solemn as they return to their duties.

Making the time for others

Dr. Pugliese returns to rounds, at the same time talking to visitors in the hall and making things happen. He’s efficient, but he seems to have all the time in the world when he engages with someone.

He’s warm and chatty as he reminds a daughter, not for the first time, to feed her tube-fed mother less. The mother is in the unit with diarrhea. Dr. Pugliese and the daughter have had this conversation before. The daughter knows what the doctor wants her to do. He knows that she will take her mother home and feed her too much—out of love.

In the hall, he recognizes a woman whose father is dying. Her mother will not come to the unit to see her husband. The doctor takes the daughter’s elbows, looks into her grim face. “You’re here,” he points out. “Don’t try to change her.”

He takes another approach. “I met your son yesterday, and his wife. They’re lovely!”

She smiles, but she’s back to the subject of her mother. “I’ll have my hands full when he dies,” she predicts dourly.

“We have great social workers,” Dr. Pugliese assures her. “We can help.”

The son who is also a doctor

A son is in a room with his unconscious father. He recites every detail of his father’s years-long battle. Dr. Pugliese never interrupts. A second son, a physician who lives out of state, has told his brother their father needs IV fluids. “Your father is dying,” Dr. Pugliese reasons gently with the son in the room, trying to dissuade him. “He’s tired. He’s had a long journey.”

But the son calls his physician brother, then offers Dr. Pugliese the phone. After 10 minutes of respectful, compassionate discussion, the medical director agrees to try. Dr. Pugliese thinks it’s too late for fluids. But they can’t hurt, he says, and if there is a change in the man lying in the inpatient unit, everyone will be pleased.

Dr. Pugliese is almost done with morning rounds. Typically, the rest of his day will include overseeing admissions in a VITAS program that cares for more than 1,800 hospice patients every day. He rounds in other VITAS inpatient units. He conducts in-services with doctors, nurses and hospitals. He oversees the educational outreach that introduces hospice medicine to physicians who aren’t likely to get it in their training. He’ll have a hand in recruiting new VITAS physicians. Whatever the task, he’ll listen, reflect and use his experience, expertise and people skills to make things happen.

But wait. Another visitor taps him on the shoulder. Her father is being released from the unit to return to routine home care. “Can we get someone to do the paperwork so we can go?” she asks. And the medical director makes it happen.