Honoring his ‘Papa’: A Perfect Pitch for the Padres 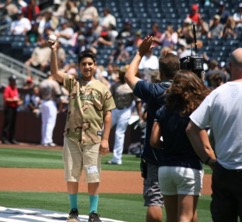 San Diego, California—Adrian S. loves his “papa,” his grandfather, Kenneth L., who worked for the San Diego Padres for more than 30 years as an operations-level supervisor for guest services, until he suffered a series of strokes.

So VITAS in San Diego arranged for Adrian, 13, to throw the first ceremonial pitch at the San Diego Padres vs. L.A. Dodgers baseball game, for his grandfather, who is a VITAS patient and suffers from dementia. VITAS was hosting a staff appreciation event at the game.

“He was in disbelief when he first heard about it,” says Tina S., Adrian’s mother. “For a kid who is an avid baseball and Padres fan it was a dream come true, a bucket-list wish he could scratch off. He was a little nervous but he kept his cool.”

Clad in Padres gear, Adrian—an Honor Roll student who also plays Little League baseball—threw a perfect fast ball down the center, to the cheers of a sold-out game at Petco Park in downtown San Diego.

Support from the Crowd

“It was electric in the VITAS section. With more than 200 employees joining in the staff appreciation event, there were tears and hugs all around as Adrian walked to the mound. It was a great way of honoring his papa,” says VITAS General Manager Nathan DeGodt.

Adrian was accompanied by his mother and other family members and was thrilled to be in the VIP enclosure.

“My dad could not be there but he smiled when he saw the pictures of Adrian throwing the fast ball,” says Tina.

Thank you for honoring your grandfather, Adrian. You certainly made your “papa” proud!